Our company is widely conducts to design the perfect mass mixer machineries in India. This machinery is specially deliberated for efficient and homogeneous mixing of dry and wet powders. These are with the safety transparent dust cover & specially designed self-adjusting sealing arrangement, which ensures the restriction of black particles enter the mixing drum. Mass Mixer is available in various sizes ranging from 10 Kgs to 400 Kgs as per GMP & cGMP models. The mass mixture machine is specially made from the mixing of the dry and damp materials. The machine is also well suitable to the tablet granulation. This machine is very efficiently mixing the material and it is proven an ideal mixture machine to mixing even the sticky ingredients. The two speed machine can customize as per requirement of the consumers.

Mass mixers are special form of pharmaceutical machinery used for the mixing of wet as well as dry or bulk material, especially suited for tablet granulation. The Mass Mixer Machine is basically mixing an assembly wherein the mixing stirrer is in horizontal position in the container Mass Mixer & has a single speed, simple rotation. The offered Mass Mixer is known for their longer operational and easy operation. 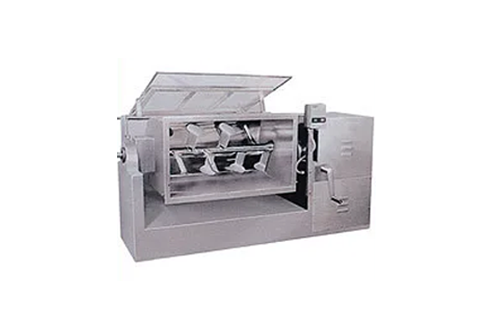